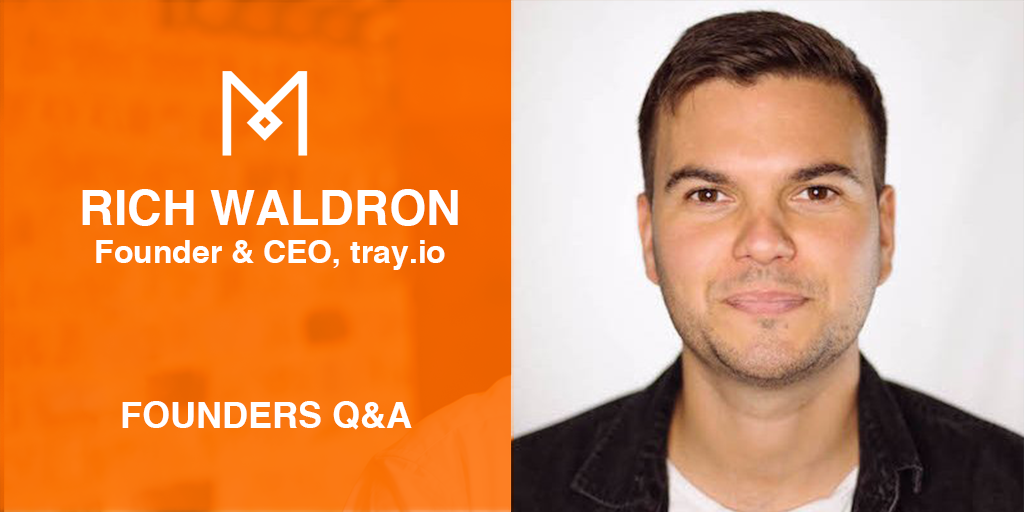 When I first met tray CEO Rich Waldron early in 2014, after an introduction from angel (and now VC) Andy McLoughlin, two things struck me. First, out of the 80 or so men in the cafe we'd picked near the Google Campus in Old Street we were the only two without full beards. Most of all, though, I was struck by how clearly he envisaged a future of easily connected SaaS services.

We got to know Rich. He manfully tasted the first batch of Mosaic whiskey, and was the first founder to visit Mosaic's new office in Soho. And we developed a deeper appreciation for the team's grit, cohesion and sense of mission. That crisp vision drives everything Rich and his fellow founders, Ali and Dom, have done.

So we want to give Rich a chance to convey how tray ticks in a short Q and A.

Mike: At Mosaic we've known each other since the 1990s, so we know the value of longstanding relationships when it comes to founding a business together. How important has your relationship as a group of cofounders been?

Rich: I've known Ali Russell (tray's CTO) since University, 13 years now. We instantly had a huge amount in common,a shared love of technology, and began working on projects together. In 2009 we met Dom Lewis (tray's CBO), who had followed a similar path alone, and we became a close group. Our friendship has been one of the most important factors in what we've built at tray. Beyond the key requirement of 'trust',we're able to work together as a very close unit. The strength of this relationship binds the company during tough periods, and fuels the momentum during growth. Having a straightforward, respectful relationship alsosets the tone for the business, especially in the initial phases when making early hires.

Mike: tray solves a hard technical problem. Why was a small team from the UK able to crack it?

Rich: There's a very strong engineering DNA in the UK that hasn't always manifested as strongly as it could in software. At Southampton University, Ali was researching the Semantic web in a tight-knit team at the Web Science Research Initiative (founded by Sir Tim Berners-Lee and Dame Wendy Hall), which did some great stuff. Ali and I have also been obsessed with technology for as long as we can remember. Our friendship started by bonding over a multi-touch OS table-top computer Ali had built as a prototype for the UK's Ministry of Defense!

So I guess we've always enjoyed work on deep technical challenges that we're able to express within a beautifully designed product.

Mike: How hard was the decision to pivot to tray?

Rich: Having initially worked on a way to bring context and reaction to our inboxes, by collecting data from 3rd party services and defining rules on our email, the transition to the product we have today wasn't as sharp a pivot as the term often describes.

In fact the pain of the existing iteration not progressing as we'd hoped was far greater. Looking back our interest was in how we could better utilize data held in disparate products - the eureka moment was recognising that unlocking this within the inbox was a lot more restrictive (& inherently less valuable) than being able to question and act on information between multiple services.

Mike: I know you've been through hard entrepreneurial times post-pivot and before your seed. Can you give us a flavour of them?

Rich: Wow, there could be a novel in that someday, but you know me, and I'll try a couple of sentences paragraph. In short, we found a way to survive 3.5 years without salary or savings. This involved building a 20 person agency from scratch, launching a magazine with a 50,000 copy monthly print run, selling shoes on ebay (to fund our rent and food), moving to the US with 3 days notice, as well as 100's of investor meetings (and subsequent rejections).

Perhaps I'm sentimental, but the running theme throughout these challenges was an undoubted confidence that we could make it happen. Many of the lessons we picked up along the way shaped the product and company we're currently building.

Mike: Why did you take the long road, building a deep technical product vs focusing on early traction?

Rich: I think at heart we're purists, who believe the foundation of a great company is to invest heavily in technology. We recognised this is a riskier approach but in all honesty it was the only path we felt comfortable taking.

Mike: It feels like you run tray differently to many of the start-ups we see. What are your most important values?

Rich: We place a huge amount of trust in our team. A running theme for us is working out how we can support a teammate to perform at their best level, because the inflexibility and preordained nature of how most teams are run doesn't make sense for us. Why hire a fantastic candidate and then restrict them with constraints that have remained unchallenged for decades?

Mike: Does that impact how you recruit and manage people?

Rich: Our process involves 3 stages, with the final one working within the team for a day (or longer). We find this is the best way to understand how a candidate thinks and can work within our team. We're hiring in San Francisco and London, by the way.

Mike: You have taken a very modern approach to building software, not least in the role design plays. Tell us about the tray design ethic.

Rich: Design is a core principle of everything we do. Every product has had a strong design focus, one which carries far beyond the UI of the platform itself.

But it's not just the product; good design sets the expectation for every experience in our organization, from how we onboard new team members, through to decks that we walk through during lunch and learns.