Published on
October 17, 2021
by
Benedict Evans
No items found. 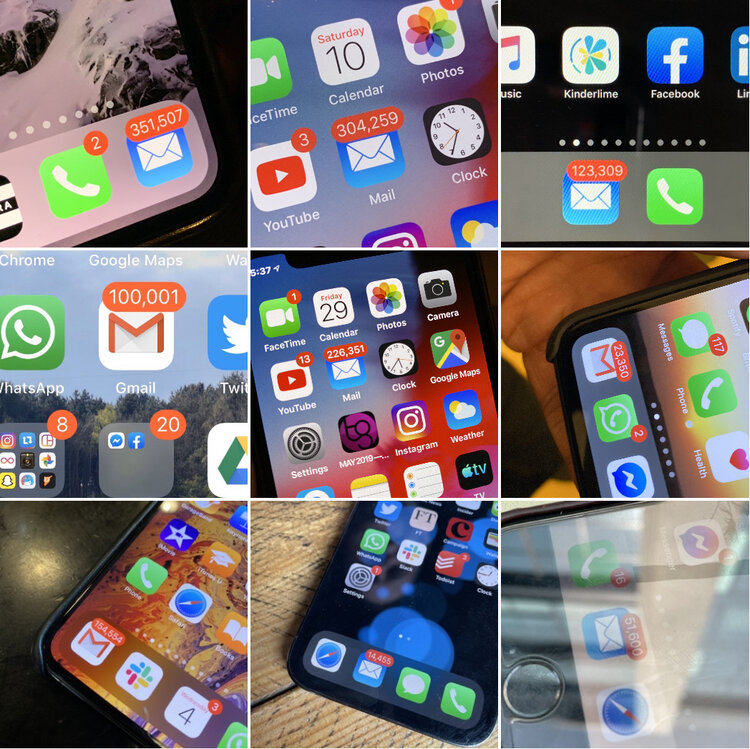 I’ve been collecting pictures like this for a while now, partly because they’re hilarious, but mostly because I think they say something interesting about how we find room for digital in our lives. The internet is a firehose. I don’t, myself, have 351 thousand unread emails, but when anyone can publish and connecting and sharing is free and frictionless, then there is always far more than we can possibly read. So how do we engage with that?

The first generation of internet services tried to help with filters and settings, but most normal people ignore the settings and don’t want to write filters, and so we very quickly went to systems that tried to help automatically. Gmail has its priority inbox, and social networks build recommendation engines and algorithmic feeds. Given that the average Facebook user is apparently eligible to see over a thousand items a day, it seems (or seemed) to make sense to try to show the video of your niece before the special offer from a restaurant you ate at five years ago. So your feed becomes a sample - an informed guess of the posts you might like most. This has always been a paradox of Facebook product - half the engineers work on adding stuff to your feed and the other half on taking stuff out.

Snap proposed a different model - that if everything disappears after 24 hours then there’s less pressure to be great but also less pressure to read everything. You can let go. Tiktok takes this a step further - the feed is infinite, and there’s no pressure to get to the end, but also no signal to stop swiping. You replace pressure with addiction.

Another approach is to try to move the messages. Slack took emails from robots (support tickets, Salesforce updates) and moved them into channels, but now you have 50 channels full of unread messages instead of one inbox full of unread messages. Google Docs, Figma or frame.io turn the messages into structure, so at least they’re connected to the workflow; Zawinski’s Law said that all software grows until it can do messaging, but now every document tries to absorb email, and turn threads into chat and version control.

Conversely, one of the early desire paths on the iPhone was the screenshot, and I think we take screenshots because otherwise whatever we’re looking at will be lost in the firehose and we’ll never find it again. Yes, you could search, but search where, and for what? Screenshots are the PDFs of the smartphone. You pull something into physical space, sever all its links and metadata, and own it yourself.

Email newsletters look a little like this as well. I think a big part of the reason that people seem readier to pay for a blog post by email than a blog post on a web page is that somehow an email feels like a tangible, almost physical object - it might be part of that vast compost heap of unread emails, but at least it’s something that you have, and can come back to. This is also part of the resurgence of vinyl, and even audio cassettes.

I wrote earlier this year about Morioka Shoten, a bookshop in Tokyo that only sells one book, and you could see this as an extreme reaction to a problem of infinite choice. Of course, like all these solutions it really only relocates the problem, because now you have to know about the shop instead of having to know about the book. Channeling that, a few years ago there was a hipster denim shop in Tokyo called ‘Not Found’, that hoped it would disappear from search engines and only be discoverable by word of mouth.

These kinds of reactions remind me a little of the Arts and Crafts movement in late 19th century Britain. In 1800, if you’d said that you wanted something ‘made by hand’, that would be meaningless - everything was hand-made. But half a century later, it could be a reaction against the age of the machine - of steam and coal-smoke and ‘dark satanic mills.’ The Arts and Crafts movement proposed slow, hand-made, imperfect craft in reaction to mass-produced ‘perfection’ (and a lot of other things besides). A century later this is one reason I’m fascinated by the new luxury goods platforms LVMH and Kering, or indeed Supreme. How do you mass-manufacture, mass-market and mass-retail things whose entire nature is supposedly that they’re individual, or convince people that a piece of mass-manufactured nylon and plastic is unique?

A lot of the digital firehose is photos. The film-camera industry peaked at 80bn consumer photos a year, but today that number is well into the trillions, as I wrote here. That’s probably why people keep making camera apps with built-in constraints, but it also prompts a comparison with this summer’s NFT frenzy. Can digital objects have value, and can a signature add scarcity to a JPEG - can it make it individual? Certainly it can, though it doesn’t follow that’s what people are actually doing. But the more interesting aspect of ‘crypto’ (or whatever you want to call it) is the idea of a decentralised computing network with incentives (money!) built into the core - as part of the mechanism itself. That ripples out to all sorts of ideas about how all those trillions of pieces of ‘content’ are created, and by whom, and how they’re distributed, selected, filtered and displayed. I don’t think that’s a solution, though, just another and sometimes better algorithm.

To come back to those 351 thousand unread emails, in some senses this is a product problem that can be solved, or at least improved, whether it’s with Slack, Figma, Snap, or just letting go and turning off the number. But really, it reflects that there are now close to 5bn people with a smartphone, and all of us are online and saying and doing things, and you will never be able to read everything ever again. There’s an old line that Erasmus, in the 15th century, was the last person to have read everything - every book that there was - which might not have been literally possible but which was at least conceivable. Yahoo tried to read everything too - it tried to build a manually curated index of the entire internet that reached 3.2m sites before the absurdity of the project became overwhelming. This was Borges’s 1:1 scale map made real. So, we keep building tools, but also we let go. That’s part of the progression - Arts and Crafts was a reaction against what became the machine age, but Bauhaus and Futurism embraced it. If the ‘metaverse’ means  anything, it reflects that we have all grown up with this now, and we’re looking at ways to absorb it, internalise it and reflect it in our lives and in popular culture - to take ownership of it. When software eats the world, it’s not software anymore.