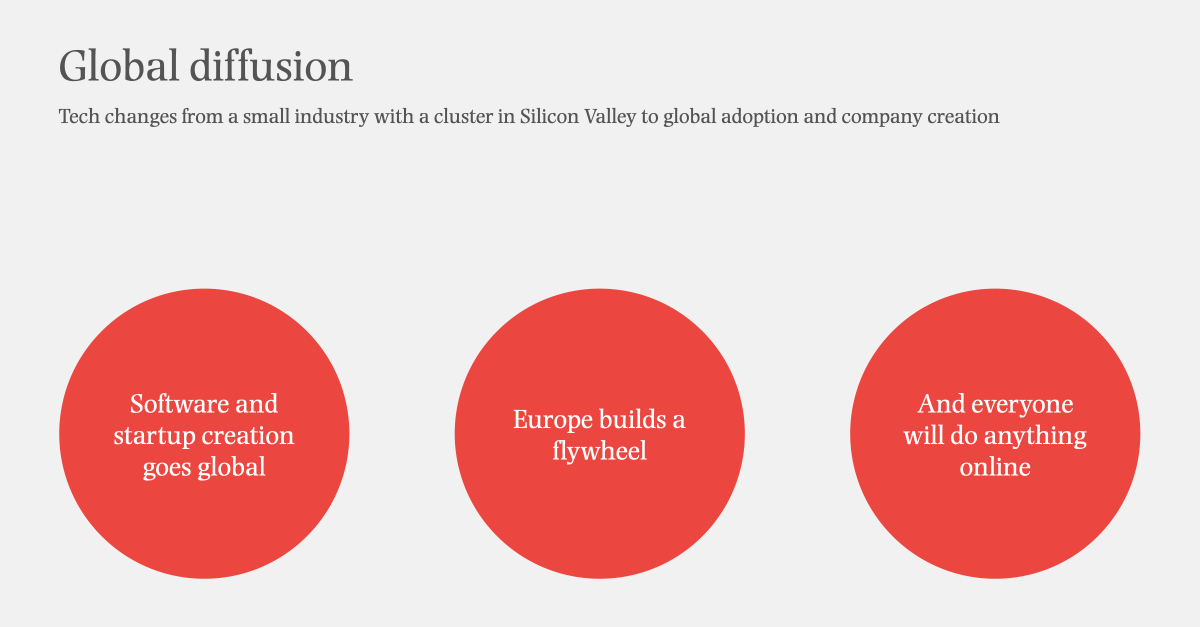 Silicon Valley was the global cluster for computing, for software and for the consumer internet, and even a decade ago two thirds of all tech venture investing happened in the USA. Europe seemed to punch below its weight, despite a bigger population and a huge single market, some great computer science schools and plenty of entrepreneurs. Maybe Europe just couldn't do tech?

In truth, that was always something of a misconception. There has always been great and important tech coming out of Europe - Apple’s ARM (Cambridge) chips are made with equipment from ASML (The Netherlands). But Europe is a harder place to build a giant company. It’s many markets, not one, with different consumer behaviour, retail landscapes and competitive dynamics. Instacart can reach more consumers in New York and LA than the top ten markets combined in any European country. Americans are far more mobile (2% of Americans move state each year and 0.2% of Europeans move country), making it easier for them to concentrate in the Silicon Valley cluster, while the European ecosystem is more diffuse. And the UK is ahead of the US on most consumer tech adoption metrics, but less than 40% of Italians made any online purchase in 2019, and the French, Germans and Spanish spend half as much time online as the British. Europe is harder!

A lot of that is changing. Something over 120 ‘unicorns’ have emerged in Europe in the last decade, the top startup events have tens of thousands of eager attendees, and early stage venture investing is up 4x since 2010 and now within 15% of California levels. The virtuous cycle of startup creation is being put together  piece by piece. Some of this is in the areas people talk of as a ‘European advantage’ - fintech, bio and frontier tech - but in fact European tech is now much more widely spread. Most of the unicorns aren’t actually in those ’special pleading’ segments, nor the investing, and at a high level the unicorn story has broadened out massively, from a handful of consumer ‘names' a decade ago to an even spread of big and important consumer and enterprise software companies.

Indeed, the real story is the generalisation and globalisation of tech company creation. When Apple launched the first Mac back in 1984, less than 7m PCs of every kind were sold that year on the entire planet. Computers have always been interesting and exciting, but they weren’t an important part of many people’s lives, and they were a small business, mostly clustered outside a small city in northern California. But today over 4bn people have a smartphone and there is more ecommerce in China than the US and Europe combined. Anyone will do anything online, and a whole wave of companies is being created to take advantage of that, even, yes, in Europe.