Published on
January 24, 2021
by
Benedict Evans
No items found. 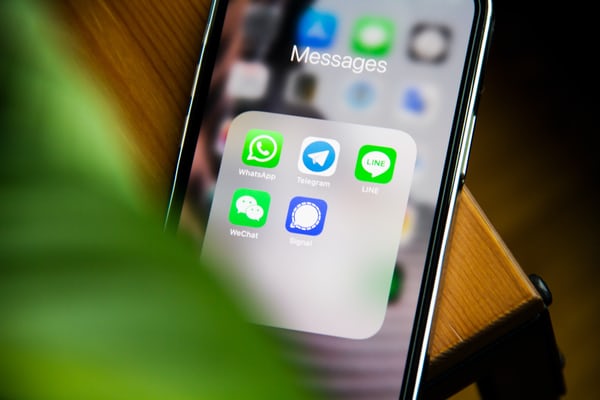 Facebook has close to 2bn users, posting over 100bn things each day. The global SMS system, at its peak, had 20-25bn messages a day.

This is not a ‘publisher’, in the sense that a newspaper or radio station are publishers - or if it is, then we’ve stretched the word ‘publisher’ so far as to become meaningless. A human editor chooses ten stories for the front page of a newspaper, and ten stories for the 9 o’clock news, but there is no-one sitting in Menlo Park choosing a hundred photos for your Instagram feed each morning.

Really, asking whether these systems are ‘platforms’ or ‘publishers ’ seems about as useful as people in the 1930s asking whether a radio station is really a book or a newspaper. Yes, it has aspects of both, but it isn’t either of them - it’s something new. I have no sympathy with the idea that somehow rules don’t apply to the internet, but rules do need to understand what it is and how it works. Rather than trying to wrestle it into familiar metaphors, we probably need to engage with the thing itself.

The metaphors are appealing, though, because without them, we don’t really know what we think about speech online. It’s a lot easier to say ‘Twitter is a newspaper!’ or ‘get rid of the Nazis!’ than to work out what specifically we want Twitter to do. We spent hundreds of years evolving complex, mostly implicit, social and cultural norms, institutional structures and laws around speech, where speech exists in many different spheres, from a private phone call to a bar to a newspaper. Actual laws in which the government stops you saying things are pretty limited, both in scope and by country, but there are great thickets of custom, ethical standards, convention and peer pressure about what can get onto the front page of a newspaper, the window of a bookshop or the evening news, and indeed what you can and can’t say in a bar.

That is, ‘What can you say?' is complicated, hard to codify, and contextual, and it’s enforced (or not) by different gatekeepers - by your friends, colleagues or peers, or by a barman, or by a newspaper editor or bookseller or TV station and their peers and conventions, and very occasionally by a judge. And, of course, each of those norms are different in different places: we can mostly agree about incitement to violence or CSAM, but the UK, France and the USA have very different attitudes to, say, libel law or privacy.

The internet is a new sphere, and it’s just as different from a newspaper as a newspaper is from a bar. In fact, it’s not just one sphere but many, and very indistinct ones at that. An SMS or a WhatsApp message still count fairly straightforwardly as a private conversation, but at what point does a Facebook Group become ‘public’? With 10 members? 100? If I reply to your tweet, is that public? It depends. If I post to my Facebook feed, how many followers must I have before I’m ‘broadcasting’? If I have 100 Facebook friends, and 50 of them post the same link, is it Facebook’s decision if that link is at the top of my feed, or theirs, or mine for friending them?  Is a tweet from a journalist that goes viral a publication? Who’s their editor?

The internet and then social platforms break a lot of our definitions of different kinds of speech, and yet somehow Facebook / Google / Twitter are supposed to recreate that whole 200-year tapestry of implicit structures and consensus, and answer all of those questions, from office parks in the San Francisco Bay Area, for both the USA and Myanmar, right now. We want them to Fix It, but we don't actually know what that means.

You can see a microcosm of this in the US debate last year about political ads on Facebook. Do you run ads that tell lies? Newspapers do, and they run opinion pieces that their own reporting staff might disagree with. US TV stations aren’t allowed to block ads from qualifying candidates. Meanwhile a ban on advertising is good for incumbents, who already have organic reach, and for populists and trolls, who can get it, but shuts out moderates and new entrants. And yet a lie on Facebook, spread with money (from where?), reaches new people. In the UK, political TV ads are regulated - should the US apply that? These are all interesting questions, but who decides? For now, one 36-year-old called Mark.

This is part of the challenge: everyone at a big social media company thinks about these problems, but they do so conscious that they don't have much legitimacy to make those kinds of decisions. They have neither the social legitimacy of a newspaper editor nor the political legitimacy of a regulator or a law. In 2015, most people in Silicon Valley would have said censorship was both wrong and unscalable - now ML means you can at least try to scale it (with tens of thousands of human moderators) and everyone understands how bad things can get and the responsibility to do something. But what? How does a 30-something PM in Palo Alto decide the basis of political speech in Malaysia? This is why Facebook calls for regulation, and sets up advisory boards, and that might be better, but doesn’t feel like the end point. Last month the EU introduced two new draft laws to regulate these companies, not as newspapers or telcos, but as something new. There will be more.