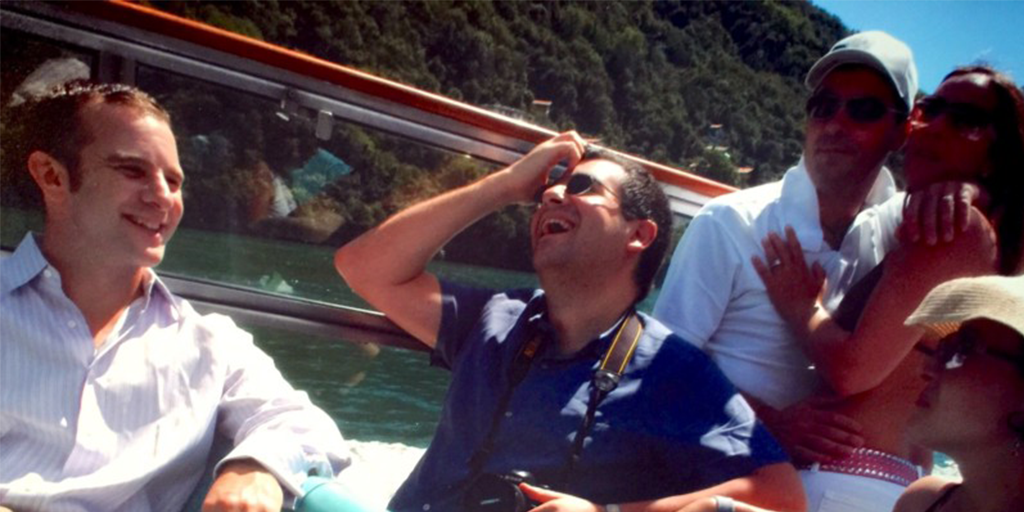 I have always thought that I would like my tombstone to be inscribed with the words above - to be remembered as a great husband, loving father and successful entrepreneur. Dave Goldberg was all of these and more, a dear friend and role model for me and for many others in Silicon Valley and beyond. He was a dedicated husband to his amazing wife Sheryl, an incredible father to his two kids, and a serial entrepreneur, whom I had the good fortune to know and count as a friend for 19 years. He passed away a few days ago and he will be deeply and truly missed by his family, friends and all of us in the tech community. Kara, Bill and Adam have all written very eloquently about Dave. When I heard the news, I was at a complete loss for words - he was a very special human being, an eternal optimist, with a razor-sharp intellect, a sparkling wit, and with a profoundly kind, caring, and warm character. He infected all around him with his love of life. He was the first entrepreneur that I worked with, when he was 28 and I was 24. He taught me so much about the qualities of a great founder - vision, creativity, charisma, and perseverance. And my life has benefited enormously from knowing him.

We met in 1996 when he was raising money for LAUNCH, his startup music CD-ROM company. We worked together for the next 10 years including on the IPO of LAUNCH and during and after Yahoo!'s acquisition of the company. The early years at LAUNCH were tough yet I always admired Dave's fighting spirit and unshakeable belief as he led the company to help realise their dreams on a bigger platform. Over five years at Yahoo!, Dave built Yahoo! Music into the biggest (legal) music destination on the web, and Dave played a very influential role at the company during its rebirth. On the personal front, I was also fortunate to join him and Sheryl on a date at the Grammy's in 2001, where I first witnessed the depth of his love and respect for his future wife. The picture above was taken on the day before my wedding on Lake Como in 2004. This was a very joyous weekend for all of us, with Dave and Sheryl dancing the night away, just a few months after their own wedding celebrations.

In the past few years, since I moved to London, I have remained in close touch with Dave. He has been a big supporter in the startup of Mosaic, my first attempt as an entrepreneur. Just two weeks ago he mentored one of our young founders who was looking for some guidance and we traded emails about a funny story. We met in March in the Arizona desert and I remember his rambunctious laughter as we talked about family, work, politics and life. To say that I will miss him dearly is barely capturing the truth. We have lost a renaissance man, who led by example and inspired us with his virtuous life. It was once said that nothing worth doing can be achieved in our lifetime. Dave challenged that with every day he lived. He was a beacon of goodness for us all to follow and he was the true measure of success.

To laugh often and love much; to win the respect of intelligent persons and the affection of children; to earn the approbation of honest critics and to endure the betrayal of false friends; to appreciate beauty; to find the best in others; to give of one's self; to leave the world a little better, whether by a healthy child, a garden patch or a redeemed social condition; to have played and laughed with enthusiasm and sung with exultation; to know that even one life has breathed easier because you have lived, this is to have succeeded.