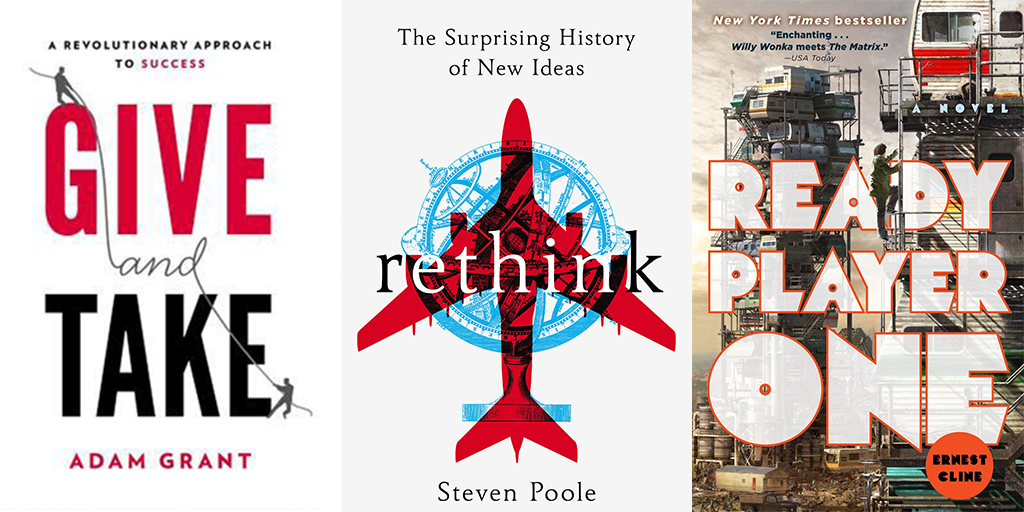 With the holiday season fast approaching we thought we would share three books that we've been enjoying over the past couple of months.

"Books are the quietest and most constant of friends; they are the most accessible and wisest of counselors, and the most patient of teachers." - Charles William Eliot

This was a serendipitous summer read based on a review. It's an adventure yarn written in the tradition of Snow Crash, but updated two decades so benefits from observing MMOGs at scale. Its narrative structure is almost designed to be a Hollywood blockbuster; which indeed it's likely about to become, as Steven Spielberg has picked up the rights to make the movie, slated for 2018 (the author has written film screenplays before).

The story is formulaic but compelling nonetheless. In a dystopian 2044, a poor kid from the wrong side of the tracks, Wade Watts, pursues a mission that inadvertently leads him to saving humanity. Unlike the Luke Skywalker mythological arc he wasn't born to this path, but earned it by hard graft - spending most of his waking (the Gladwell-esque 10,000+) hours jacked into the OASIS, a sprawling neo-metaverse where you can be anything you want to be. The OASIS founder, who grew up in the late 20th century, was fond of riddles and left no heir. Instead, the keys to control of the OASIS - and said founder's inheritance - is up for grabs, to be claimed by whomever can solve his fiendishly complicated puzzles. For the most part, these riddles were devised in the context of late 20th century video games and pop culture - with relevant clues left scattered throughout the virtual world. (It's a little ironic that the proverbial philosophers' stone may be found via mastering trivia from contemporary video game and pop culture, but you can put away that thought in a box for a few hours and enjoy the book anyways).

Back to Wade. Millions are searching for the prize, some alone, others in guilds not unlike Eve. Good fortune leads our protagonist to solving the key to the first riddle, and the race to control "reality" begins.

Apparently every new Oculus employee is given this book to read on Day One.

Give and Take (Adam Grant)

It is nice to believe the old sayings about karma and "what goes around comes around". Grant actually provides strong evidence that successful entrepreneurs and leaders are givers and not takers or matchers. If you're a taker, you help others strategically, when the benefits outweigh the personal costs. If you're a giver, you help whenever the benefits to others exceed the personal costs or you might help others without expecting anything in return. If you're a giver at work, you simply strive to be generous in sharing your time, energy, knowledge, skills, ideas, and connections with other people who can benefit from them. By redefining success as achievements that have a positive impact on others, Grant encourages companies to change the way they hire, reward and promote staff. Givers who ask questions of their customers rather than asserting the answers sell more than aggressive takers. Acts of kindness help people achieve happiness and meaning, which then motivate them to work harder. Givers also build stronger networks, whose members repay their generosity, often years later. This is an optimistic and a brilliant book, a rare combination from a whizz kid Wharton professor, whose newest book Originals will be reviewed in our next newsletter.